I'm working on an infrared based model train recognition system. This system is intended to be used instead of the other available feedback methods. The main advantage with my IR based system is that it gives an individual identification of each train, which is useful on computer controlled layouts. I also believe this system will be very reliable. The design of the system is fairly simple, and the components used are relatively low cost. If this system was built in volume production, I think it could have comparable costs with the more primitive feedback systems.

Overview of the system 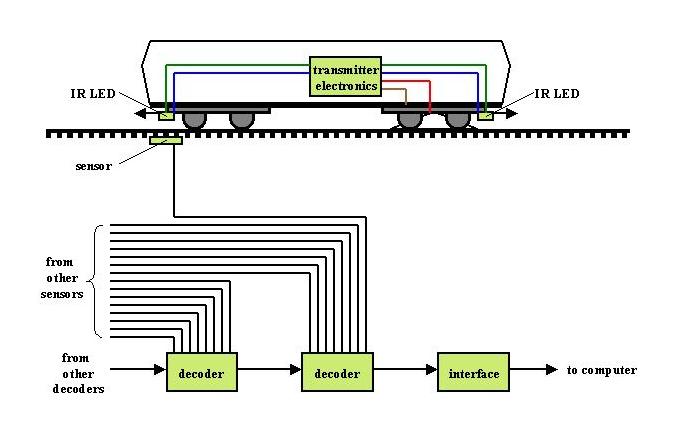 Detailed description of the system components

The system is made up by the following components:

I believe this system will be very reliable. The tests so far have given good results. I have run 3000 rounds on an oval track with three sensors and one decoder, without any errors or missed readings. In previous tests I have run another 3000 rounds with one sensor and a simpler test version of the decoder, also without any errors. In total this sums up to 24000 readings and several hours of operation. In later tests I have noticed that the sensors can shake out of position and cause missed readings, but this can be prevented by securing them with a piece of tape.

Simulation shows that the system has a capacity of over 100 readings per second without any missed readings.

What could be a problem is that the sensors react on normal light. They do have daylight filters, but this is not 100% effective and the sensors may be blocked if there is too much light on them. I have observed this while developing the system, but I have not so far seen any problems when the sensors are installed in the track.

I have manufactured circuit boards for the sensor, for Märklin M tracks. I have assembled and tested around 50 sensors. This is enough to control my layout, but maybe I will add some more sensors later.

I have assembled six decoders so far. I build the decoders on Veroboard instead of making a real circuit board layout. The decoders have been verified through both real tests and simulations. I made some successful tests with all 6 decoders and 48 sensors when I had my layout set up in April-May 2004.

I have also built the interface, and written a simple monitor program on the PC to check that the whole system works. I have not yet had time to write any real control program for my layout.

Since most components are much cheaper in larger quantities, I will have more pieces than I need. So if you want to experiment with this yourself, I might be able to supply you with some of the components.