Märklin have manufactured a number of MaK diesel models: 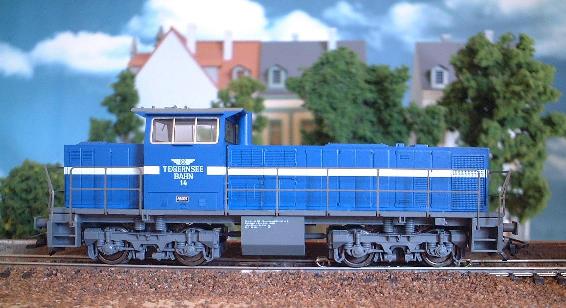 I bought a 37645 in the spring of 2001. I was not satisfied with the non-regulated speed characteristics, and after a discussion in a discussion forum I decided to convert the loco. At that time (the summer of 2002) Märklin did not have any regulated decoder that could fit into the loco, and I therefore decided to use the ESU LokPilot decoder for the conversion. After the conversion, I wrote the original version of this article.

Comparison between ESU LokPilot and the Märklin 608018 decoder

I have compared the 37646 (with Märklin 608018 decoder) and the converted 37645 (with ESU LokPilot) side by side in both digital and conventional AC operation.

In digital operation both decoders compare fairly equal on flat ground or uphills. The acceleration and brake delay seems to work a little bit smoother in the Märklin decoder than in LokPilot, but the difference is really minor. The Märklin decoder shows its superiority when the loco is running downhills with heavy load. The LokPilot controlled loco accelerates downhills, most visible at low speed settings. Not even the Märklin decoder is perfect in this respect, I think the problem is inherent in the motor concept. With the Märklin decoder it is much less noticeable however.

The really big difference is seen in conventional AC operation. The Märklin decoder applies the maximum speed setting and acceleration delay (and also some speed regulation, I assume) in AC operation as well. The AC operation of the 37646 is therefore reasonably slow and not very load dependent. With the LokPilot decoder there is no regulation at all in AC mode, the loco is all too fast and the speed is very load dependent. Without series resistors for the motor (see below), the LokPilot controlled 37645 was so fast that it was totally useless in AC mode.

If I were going to convert an older short Märklin MaK diesel today, I would choose the Märklin 608018 decoder. The overall performance is definitely better than with the LokPilot, and the conversion is much more straight forward. While it takes a lot of testing with different regulation parameters to get good performance with LokPilot, the Märklin decoder behaves well out of the box. The soldering is also less complicated with the Märklin alternative.

There are a few reasons why you could still want to use ESU LokPilot instead of the Märklin 608018 decoder. LokPilot offers DC and DCC operation as well, and it is much more configurable than the Märklin alternative. I don't know the price of the 608018 decoder, but I guess the LokPilot will be much cheaper.

In the following, I will describe the conversion with LokPilot in detail, but some of the information may be useful also if you use the 608018 for the conversion. Here are some characteristics of the LokPilot decoder:

The LokPilot is sold through Noch. This is good to know if you want to buy one. 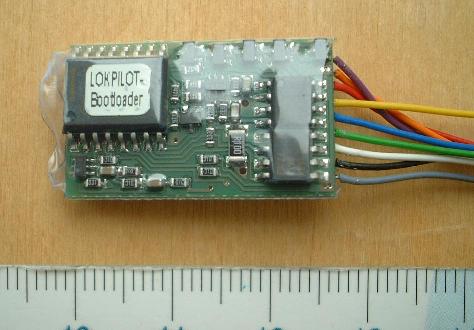 Preparation of the loco

Before the LokPilot (or the 608018) can be installed, the original decoder must be removed. The decoder is unscrewed and folded over, and the two small LED boards at the ends are pulled up and folded out. The five wires connecting the loco to the decoder package are soldered off at the decoder. Then, all the wires are disconnected from the small LED boards, and the excessive solder is removed. I have documented the original wiring, and a drawing can be found here.

Figure 4. The opened loco, with the original decoder folded out.

You need the following material to complete the conversion:

The LokPilot is mounted with double-sided tape on the black plastic cover over the motor gear, in the long end of the loco (the end where the wire from the pick-up shoe comes up). The connection side of the decoder should be up, and the wires should go out towards the center of the loco. 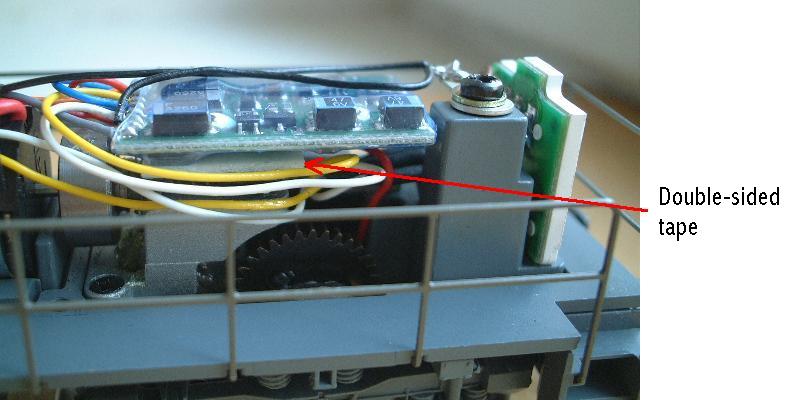 Figure 5. Mounting of the decoder.

The two brown wires from the bogies are connected to the chassis with two solder point brackets that are mounted with the screws that held the original decoder. The contact through the chassis is probably sufficient, but I mounted an extra wire between the two brackets, just to be safe. The black wire from the LokPilot is soldered to the nearest solder point bracket. The red wire from the pick-up shoe is soldered to the red wire of the LokPilot, and the soldering point is protected with a piece of shrinking tubing. The wire lengths are kept to a minimum, since there is no room for excessive wiring inside the model. 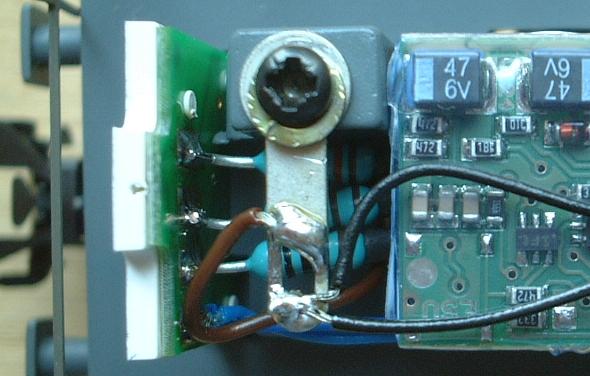 The Märklin MaK models have LED (Light Emitting Diode) front and rear lights. The LEDs are mounted on small circuit boards at each end of the loco, but the series resistors are mounted on the main board of the original decoder. Each LED board has five LEDs, three white (yellow, actually) and two red.

Figure 7. LED board schematics, seen from the green side.

The LEDs need series resistors. On the original decoder, 1 kOhm is used when there are two LEDs in series, while 1.2 kOhm is used for the single LED. I have used the same values. I have soldered the resistors directly to the LED board. The leftmost connection on the LED boards shall be connected to the blue function return wire of the LokPilot. 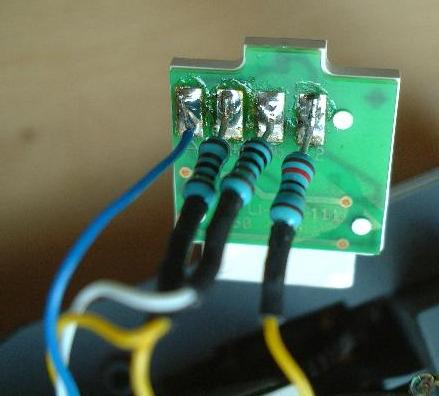 Figure 8. LED board with mounted resistors.

This light connection scheme is valid for the German, Dutch and Austrian models. The Swiss 33642 and 37642 models have a different light scheme, with three white (yellow) lights forwards and one white (yellow) light backwards. More information about these models can be found here. It can be noted that the Märklin 608018 decoder has built-in support for the Swiss light scheme.

There are two wires coming from the motor. One is red, the other is red and black. These two wires shall be connected to the orange and gray motor outputs of the LokPilot through a 33 Ohm resistor. Since it is difficult to fit a 33 Ohm resistor with sufficient power rating (4 Watt) inside the loco, I use four 8.2 Ohm 1 Watt resistors in series instead. The resistors serve two purposes:

With the default direction I have chosen, i.e. the long end forward, the red motor wire shall be connected to the orange wire of the LokPilot, and the red/black motor wire shall be connected to the gray wire of the LokPilot. I didn't have the 8.2 Ohm resistors when I made the conversion, so I temporarily used three 22 Ohm resistors instead. This worked well too, but the resistors could have burnt if I had used the loco with heavy load for a long time. I therefore replaced the temporary resistors once I got the right ones. 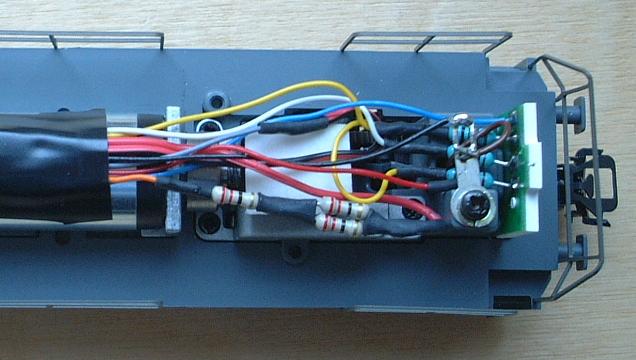 Figure 9. Temporary motor connection. The 22 Ohm resistors used have insufficient power rating and may eventually burn if not replaced.

Now, the loco is converted, and it should be possible to operate it, but it needs to be adjusted to get the best possible driving characteristics. You may also want to change the loco address. The LokPilot is on-track programmable, and there are several different parameters that can be changed from the control unit. If you use a Märklin 6021, the programming procedure is described in the instructions that are delivered with the LokPilot. If you use e.g. the Intellibox, the programming procedure should be even simpler, they say. I use homemade 6021-like equipment to control my layout, and I had no problem to follow the instructions. The tricky thing is to find out the correct values of the regulation parameters. I have spent quite a lot of time on this and I think the following parameters are close to optimal:

There are other parameters too that can be programmed, like middle and maximum speed, acceleration and brake delay, and selection/deselection of different operation modes. These other parameters are mainly a matter of choice, and I don't want to give any recommendations. A good idea is to set acceleration and brake delays to low values, and maximum speed to 63, until you are satisfied with the regulation parameters.

Observations and summary of the results

The resulting speed characteristics in digital mode are very much improved over the original decoder. The loco now runs smoothly (comparable to 60901) with and without load on flat ground and uphill grades. On downhill grades there is still a bit jerkiness at the two lowest speed steps, and with heavy load it also accelerates. The downhill behaviour can be improved with other regulation parameters, but not without negative effects on the flat ground performance.

The speed characteristics in analog AC operation were better before the conversion, but with the addition of the resistors in series with the motor it is at least usable. Again, it is the downhill grades that cause problems, in this case a too high minimum speed. Unlike the original decoder, the LokPilot doesn't apply the maximum speed and acceleration/brake delay settings in AC analog mode.

Under normal load conditions, the model consumes very little power, at least after the conversion. (I didn't measure it before the conversion.) On flat ground it requires around 100 mA / 2 VA , which is about one third of a standard loco. The power consumption increases significantly with heavy load, but it is still low compared to other locos. The highest current I have measured is 270 mA, but theoretically the maximum should be around 375 mA / 7.5 VA.